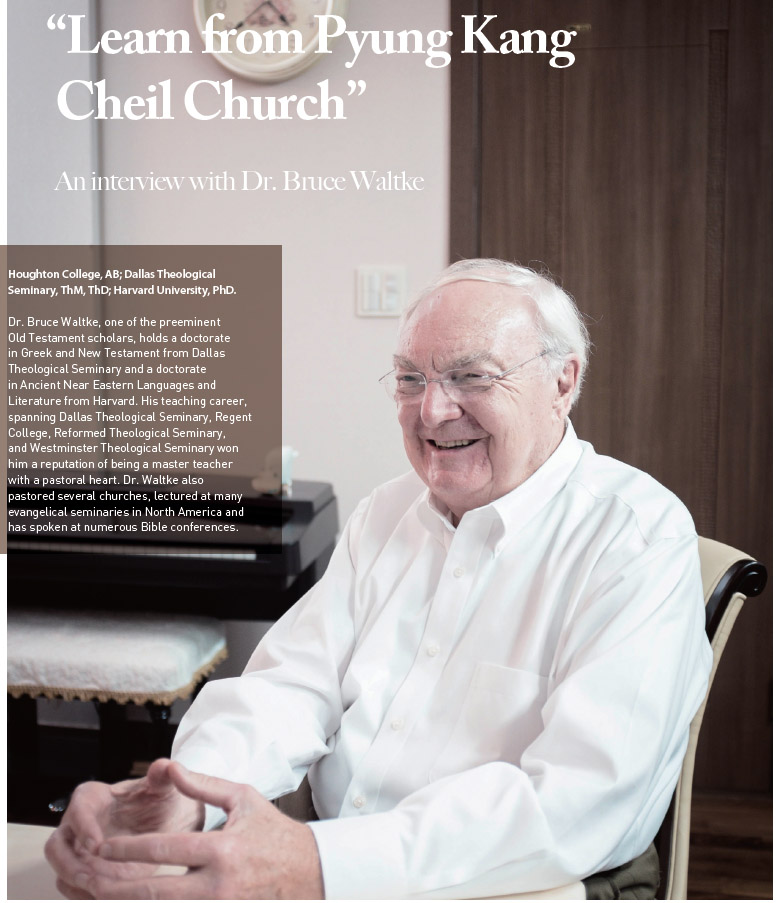 The world-renowned scholar’s very first visit and seminar in Korea surely beat the scorching heat of August. The pastors and theologians, who could learn about this author only through his books, raced to Yeoju, Kyong-gi province. Those who couldn’t attend the conference even requested us to share with them the contents of his lectures. In order to meet such fervent interest on Dr. Waltke, Champyungan Magazine requested an interview with him. 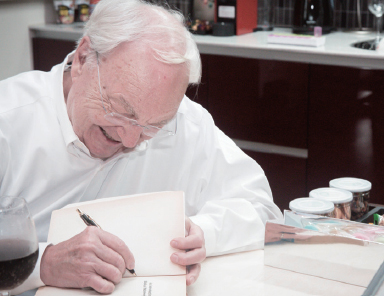 Your background is unique in that you specialize in both the Old and New Testaments. Is there a special reason?
Originally, I did my masters in Greek and New Testament at Dallas Theological Seminary. I learned from a professor at that time that I must accurately understand the biblical languages in order to understand God accurately, so I was led to delve into the Greek original language. I was trained to microscopically observe parsing, prose, texts and so forth for each and every word. After graduation, I fell into a tension between ministry and academia.
President of Dallas Theological Seminary interviews all the graduates and gets them personal counseling, and he counseled me to go into education, so that’s why I went on to academia.
In my first teaching position, I taught both Greek and Hebrew. They needed an Old Testament professor, and so I was given scholarship money and leave of absence to go on and get my Ph.D. at a university of my choice. I chose to go to Harvard so I majored in ancient Near Eastern language and literature with specialization in the Old Testament.
As a senior member of the theological academia, what are your feelings about the liberal inclinations of the biblical scholarship?

First of all, what I mean by liberal is that reason is put above revelation. If I build my life on reason, then the only logical conclusion is agnosticism. The finite mind cannot come to His infinite truth, the absolute truth. Unless you know comprehensively, you can never know absolutely or certainly.

So, for example, we used to think that forest fire is always bad, but with knowledge we now know is that they are necessary. We used to think that waters in a dam are always good, but with knowledge what we know is that it can destroy ecology. So, therefore what we used think was good turns out to be bad; what we used think was bad turns out to be good. So, without revelation, we have no certainty as to what’s good and bad. So I think that revelation is intellectually defensible. Ultimately, it has to be the work of the Holy Spirit who convinces us of the truth. Because my faith was based upon my reason, I would collapse, for my reason can never come to the absolute truth. So the first cause of all good is God. 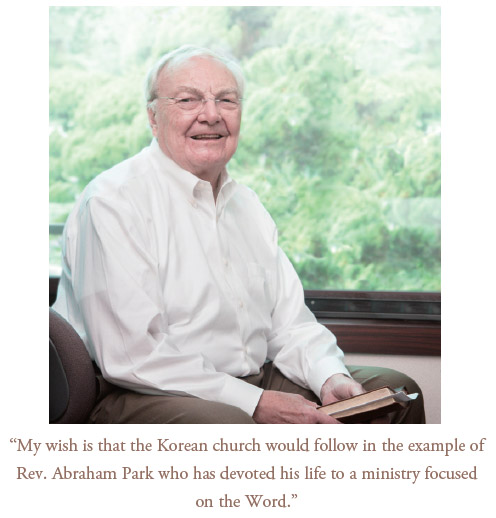 And there will be sometimes discontinuity between revelation and reason. For a simple reason that our finite minds will always come to less-than-perfect conclusion, for reason will always be less than certain and perfect. And if we have the perfect Word of God, then there never has to be tension.
So in cases like that I will go with revelation although against human scholarship. So for example, take Psalm 16, where it says, “You will not abandon my soul to Sheol; Nor will You allow Your Holy One to see corruption” (Psalm 16:10). Now, when my authorities for Hebrew were from Brown-Driver-Briggs (BDB), and they give for the word for “corruption” the Hebrew word shahat, which offer you only the option, “pit.” So, they translated: “that You will not allow Your Holy One to see pit,” that is death. So the implication of that is you will not suffer premature death. If that’s the meaning then it cannot refer to Christ. It cannot refer to the resurrection for the Christ.
And yet, Peter understood the word shahat means “corruption.” And therefore you argue that since David’s body saw corruption, this must be a prophecy of Jesus, His greater Son, who would not see corruption and death. So with more learning and more research, I discovered that the word shahat can mean “corruption” (1 Peter 1:4; 23). So, actually I’ve drawn the conclusion that it has to mean corruption, therefore it is certainly a prophecy that God would not abandon one of whom He is speaking to Sheol, He will not let his body to see corruption. So, say from my second year in seminary, 1953, until I did my research in 1993 where I realized it can mean corruption, for 40years I had tension between scholarship and the Bible. For 40 years I had lived by faith and not by reason. With more research I discovered that my faith was more reasonable than the scholarship at that time.
You must have had many opportunities to come to Korea, so why is this your first time? Why haven’t you come before then?

The Pacific (laughter). I’ve gone across the Pacific three times. To tell you the truth, I hated it. So, I once crossed to Australia, but the time difference was very hard on me. And once to Singapore and I didn’t get my bearings for two weeks. I went once to Hong Kong, and it took me a while for my biorhythm to catch up.

So then for this trip, you must have had a great determination to come here like that, especially because of your advanced age (of 83) and busy schedule. Was there anything that made you accept this invitation and not the others?

I figure it was because of my friendship with Dr. Gage (Dr. Gage is the dean of the Old Testament at Knox Theological Seminary and also Dr. Waltke’s former student). He encouraged me to come.

He said, “You must come and see the church and the ministers.” I must say this time by God’s grace I feel a lot better this trip. Really I feel best this time compared to other trips I’ve taken.
We are curious how you came to meet Rev. Abraham Park, and also whether you have read any of his History of Redemption series books, and if you have, what are your impressions of the books?

I knew it then from the students and others. And I was teaching with Dr. Gage, and I became more aware of it. I read through it and I thought it was great. I praised God. I may have some reservations about some things, but I don’t think it is problem for discussing. Basically, it was good. I am very impressed with his knowledge of the Bible and his sound theology.

I don’t know if you’ve heard about the accusation of heresy controversy that Rev. Abraham Park has been suffering here in Korea. Did you have any thoughts on that?

I don’t know enough about it. I think since his ministry has been so well proven, it is a place for testing unfailing loyalty to a brother. I think it is like Benjamin; they found a silver cup in his sac and he was found guilty of sin. Benjamin would become a prisoner, and all the other brothers could go free and go home. But they didn’t. They went back with their unchanging of faith and their loyalty. I think this is a place of unfailing loyalty to a brother. My first response is that I can see the ministry here and the fruit of it are wonderful. So I’m going to remain loyal as a brother.

We should make every effort to keep the unity of the people of God. Even if a person is in the wrong (I don’t think it’s at all true of Rev. Park.), our endeavor should be to forgive and to restore.
It is the tragic history of the church that we have tended to be divisive. The sign of discipleship is our love toward one another, not speaking in tongues.
You arrived in Korea last Wednesday and on Thursday you gave two lectures at Yeoju, and then on the Lord’s day and Monday you preached again. Was the schedule tiring for you?
As I mentioned before, this trip to Korea was not tiring at all. I was rather energized during this trip. It was especially moving to see the congregation here sit for two hours straight cross-legged like the Dalai Lama. While I was speaking I continually felt the presence of the Holy Spirit and that revealed many things about this congregation.
The first impression I got from Pyungkang Cheil Church is that this congregation was well-trained in the Word of God. The fact that they can follow everything I was saying about the Psalms shows me that they are well-versed in the scriptures. It proves that the congregation spent a lot of time in the scriptures and also that Rev. Park had taught them well.
Are there not many churches in America that still holds to the orthodox faith?
I wish the average evangelical congregation in the United States was like this one (Pyungkang Cheil Church). But the truth is the average evangelical congregation is, by comparison, subpar. We have exceptional churches but there isn’t as much focus on the Word of God in America.
I think the great danger facing the church here is materialism. As you become physically prosperous, you have less need of God. That is a great danger. Nixon said that in the 1930s, America was poor but spiritually rich. In 1970, we are materially rich but spiritually poor.
With God’s grace, when I return, I’m anticipating a cycle where I fast on Friday with Christ (to enter into His suffering) and feast with Him on Sunday. I think the great danger is that we are always feasting and not fasting. The Korean church can also follow in the steps of the American church, and so I believe that the affirmation and encouragement of the covenant community is very important. Faith is not for mavericks, we’re not at it alone. The entire Korean church needs to restore its unity and battle the dangers of materialism together. And this church (Pyungkang Cheil Church) can serve as a model for the Korean church at large.
Are there any memorable Korean students that you still remember? Also, do you have any words for the Korean church or Korean pastors?
The student that comes to mind is Kim Jung-Woo (Professor at Chongshin Theological Seminary)
who excelled in my Psalms class at Westminster. My words to the Korean church is “listen to Rev.
Park (Rev. Abraham Park). He has the best advice for young people and young pastors. The greatest tradition of the 2000-year church history is biblical research and prayer. Rev. Park’s ministry has been very faithful to this tradition. I’m very impressed with his ministry and I just delight in his emphasis on the Word of God. 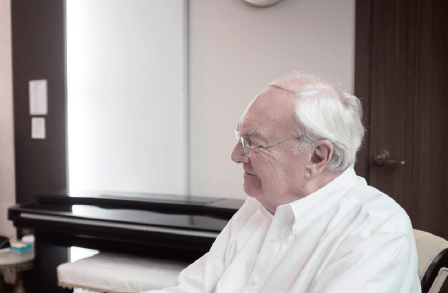