2013 Summer Conference on August 8th (The Day 4)- The morning lecture.

In the fourth morning of 2013 Summer Conference, members of the church quickened their pace, expecting the grace to be allowed through Dr. Bruce Waltke. Before the sermon, there was a short introduction of Dr. Waltke by the presider. To introduce himself additionally, Dr. Waltke told a funny anecdote. When he was invited by one church in Vancouver, there was a banner which advertised the church's assembly. There, the title of the sermon and his name were somewhat connected to each other, making it look like “A speaking donkey. Bruce Waltke (Deut 23:28-30).” And he asserted that he personally believes that is the precise description of him. In fact, he was relating himself to a donkey in the Bible that delivered God's messages to Balaam. This humor created not only smiles on many people's faces but also a humble atmosphere in which he and everyone humbly lower himself before the Word of God. The verses for the sermon were the entire chapter 22 of Psalms, titled "My God, My God, Why Have You Forsaken Me?" 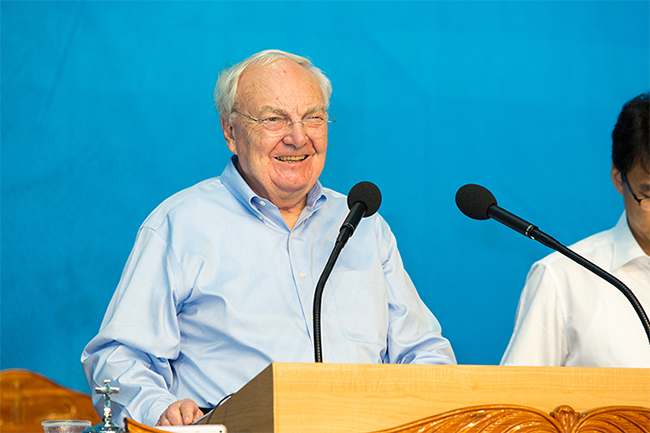 The chapter 22 of Psalms is very intriguing.

When Jesus was crucified, he quoted this chapter. This specific verse can also be found in the book of Matthew. The reason why Jesus explicitly mentioned this chapter is to console us in such a time of suffering. The fact that we could be experiencing the sufferings similar to those of Jesus comes to us as a great consolation, and we can know that Jesus does sympathize and empathize with us.

The chapter 22 of Psalms is a psalm of lamentation and supplication by David. The latter mostly begins by calling God directly.

The verses from 1 to 10 can be divided into two stanzas. The first stanza from the first to the second verse illustrates David's lamentation. Later, in the verses from 3 to 5, David is convinced by the God's gracious and truthful act towards the forefathers of faith.

The verse 11 can be seen as a transitional point. Here David beseeches God by saying "Do not be far from me", which also appears in the verse 19 and 21. At the end of the verse 11, David further implores that there is no one to help him.

The first seven verses from 12 to 21 describe the profound grief of David. The last three verses describe his plead. Each the number 7 and 3 is a complete number.

The verses from 22 to 31 are about praising God. These verses can also be divided into two stanzas each with five verses. The first stanza is God's speech towards His people including you and me. According to Galatians 3:27-29, those who are baptized into Christ are the descendants of Abraham.

The chapter 22 of Psalms is balanced in this way. Considering that Jesus Christ quoted this chapter at the time of hardship, we can infer that Jesus Christ was not bereft of rationality. Rather, all the circumstances were under His control.

1. The lamentation and the conviction.

"My God, my God, why have you forsaken me? Why are you so far from saving me, so far from my cries of anguish? My God, I cry out by day, but you do not answer, by night, but I find no rest." These two verses imply that David was praying night and day; however, God had not made any response. These questions are not made to seek an answer but to mirror our behavior when we mourn in anguish.

Here, it can be inferred that Jesus paralleled his sufferings and challenges with ours. It is natural that we, as Christians, face those kinds of sufferings. Even at this moment we might feel that God is not with us. However, now we can be assured that God is always present with us. If we ever feel His absence, we can keep our faith in God by recalling the fact that God never failed to keep His promises with the ancestors.

The verses from 6 to 7 teach us to behave like David when people, not God, abandon us. In such a time, he was reminded as he looked into his past, that God never left him in any circumstances, thus reinforced his faith in God.

2. The lamentation and supplication

Enemies of David are depicted as animals. The verses from 12 to 13 describe them as bulls and lions. Behind the images of the animals, we can see that they symbolize Satan. Then, the description of his emotions follows.

The petition suddenly turns into praise, reminding us of the resurrection of Jesus that took place instantly. The reason King David wrote this praise before the persecution was that he was confident that God would save him.

The first five verses of David's praise are directed to the community with whom God made a covenant. Along with the praise, he worshiped and gave offerings to God. That is, he praised and served the offerings, after which people could eat them all together. This teaches us that it is with the Lord's presence that He and all the communities become united altogether.

The rest of the verses also mention the people outside 'the community of covenant.' According to the verses, the way God answers our prayers is so mysterious and wondrous that His answers reach the ends of the earth and influence many people.

The first part of Psalms 22 seems to foreshadow the defeat of Jesus Christ. On the contrary, however, at the end of the chapter, he eventually obtains the victory, defeating all the enemies.

Maybe you are feeling defeated in your lives now. But I suggest you have a strong conviction that we will, in the end, win over those bulls and lions and triumph.